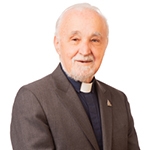 Blessed Basile Moreau, founder of Holy Cross, placed his religious family under the protection of the three members of the Holy Family: Jesus, Mary and Joseph. Thus, to Our Lady of Seven Sorrows, he entrusted the sisters, to Saint Joseph, the brothers; and to Jesus, invoked under the name of the Sacred Heart, the priests of Holy Cross. On this third Friday of June, we celebrate the Sacred Heart. What exactly are we celebrating?

Devotion to the Sacred Heart had been spreading from the 17th century onward, especially after the apparitions to Saint Margaret Mary Alacoque. However, we can ground the origin of this devotion to the heart of Jesus in a text from the gospel according to Saint John which tells us that at the moment that Christ died on the cross, “One of the soldiers pierced his side with a spear, and at once blood and water came out.” (John 19:34) This pierced heart of Jesus becomes a striking expression of this love of Christ who goes so far as to give his life. Blood symbolizes this gift of his life, water also expresses this gift that gives life. Celebrating the feast of the Sacred Heart is to recognize the ultimate sacrifice of Christ on the cross, the inexhaustible source of life for those who believe in him.

The Sacred Heart would quickly find a place at Saint Joseph’s Oratory of Mount Royal. From the beginning of the undertaking, an altar was dedicated to it in the crypt church. Brother André no doubt must have prayed at the foot of this altar just as he must have at the foot of the altar dedicated to the Virgin Mary. Among the words attributed to Brother André which were cited by his many witnesses, none explicitly mention the Sacred Heart. Nonetheless Brother André was speaking about it when he said, “The door to heaven is the heart of Jesus. The key to the door is prayer and love.”

Saint Brother André found this same sentiment for the love of Christ in his devotion to the passion of Jesus, which was for him, the greatest manifestation of the love of Christ. He used to say, “Our Lord gave us proof of such love in his suffering and his passion.”

On this feast of the Sacred Heart of Jesus, we are invited to meditate on this divine love which is manifested in the passion and death of Christ. And, just as Brother André knew so well, let us entrust our world and its sufferings to him. Let us open our hearts to others through prayer and love.